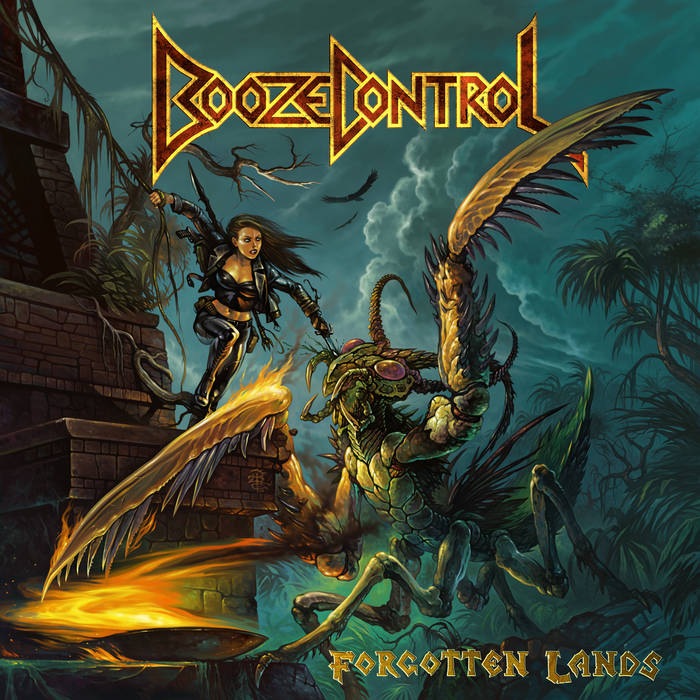 Track Name: Forgotten Lands
I'm still hungry, there must be more
Things no one has seen before
Lands uncharted, worlds unknown
Caves the sun has never shown
From the deepest mines to the highest peaks
From the deserts across the seas
From the skies up high, to the earth below
I need to witness long forgotten lands

I'm still hungry, there must be more
I've been through untamed wilds before
Chased by cold eyes, night and day
As the hunter turns to prey
From the deepest mines to the highest peaks
From the deserts across the seas
From the skies up high, to the earth below
I seek dangers in long forgotten lands
Track Name: Attack Of The Axemen
Fires in the night, the sound of battle
As warriors and victims come to lay down side by side
The weapons clash, they prove their mettle
There is no glory lost on those who'll never rise

No remorse, this is our own way
Our enemies know better than the fools who died alone
Pushing on, this will be my day
I see them running from the axe that soon will bite their flesh

I'll never doubt, this is my hour
As suddenly the ground beneath my feet is giving way
I cough up blood, the bile tastes sour
And with my final breath I see the error of my ways
Track Name: The Nameless
The betrayal brought him close
He'd pursue the path he chose
No mortal consciousness could cloud his mind
A nameless dread before his eyes
Unknown the pain which would arise
Detached from weakness of mankind

The countless markings in his blade
Remember those who had betrayed
The one who came back to reclaim the debt
Mere moments seperate from his goal
To cut the curse out off his soul
And earn his name among the dead
Track Name: Of The Deep
I gained a taste for delectable sin,
Many sustained it, but few have bought in,
I am a sinner in the seat of a saint
I will no longer try to abstain
Mortals granted me but satisfaction
Could quench my thirst, but that's where it ends
If only, if only, my call to action
Could reach so much higher, beyond simple men

They used to call me a saint
Who told the tales
Of the deep
As vivid as day is bright
Can't get rid of the taint
They tip the scales
Of the deep
Eyes, blinded by gleaming light
I take a few each night
They shall be my sacrifice

Gathered my might, became so much stronger
As my tainted reign became ever longer
But as time faded my soul it was taken
As fuel for the worlds but I'll reawaken
My time long gone, again the flame faded
Roaming the world while my coven degraded
Reaching the cities where once the gods dwelt
The youngest divine by my hunger was felled

Heirs of the flame once again seek the fire
Pleasing the old gods to whom they aspire
Now once again I sit high on my throne
Watching and waiting with powers unknown
Track Name: Spellbound
Through the woods over water and land
In the sun I wethered the heat and the sand
Now here I stand
Through the mist crossing mountains and streams
Blinding ice, I must go on by all means
Seeking my dreams

Here I am at my journey's last stage
Looking back over far more than one human age
Turning the page
Through the woods over mountains and snow
I set out to teach them all that I know
You reap what you sow
Track Name: Slaying Mantis
A rude awakening at faraway shore
Just like so many times before
The lead's still hot, it guides me right to the east
I will not rest until I find the beast

The cold steel in my hand awaits the attack
Sharpened claws and toxic spikes on its back
The massive creature pounces out of the shade
I show no mercy, neither does my blade

I prowl the twilight in the jungle day and night
Just one goal on my mind I'm slaying the mantis
The heart of darkness cannot keep it out of sight
I will avenge all who were slain by the mantis
I'll track the monster through the jungle's fading light
Just one goal in sight, I'm slaying the mantis
The heart of darkness will not keep me from the fight
I'll keep on hunting till it's slain
Track Name: Playing With Fire
Moving the pawns so ingeniously
The masterminds in command
Painting the image of the enemy
With blood in the desert sand

We are the wild beasts, let loose upon this world
You know the price, the value's all the same
Hear the sermon, a pack of lies
Manipulation's our game

The king must fall, the people crawl
Just figures in the master plan
But one day we're gonna pay

Feed the spider to prey upon the snake
From the distance we will watch them die
Divide and conquer, give or take
We are awaiting our time

The king must fall, the people crawl
For the greater good of men
But one day we're gonna pay
Track Name: Thanatos
Hear the canter
From beyond
You know the end is coming
Your thread's been cut, you can't abscond
Night is falling
Make amends
The clock strikes midnight
The sand still falls but your life ends

And the light begins to fade

Rest forever
Rot away
Is there a chance to withstand?
Exchange the hunter and his prey
No surrender
Take a stand
One last uprising
To take the reins out of his hand

And your life begins to fade

No tails nor heads
He takes the forsaken threads
Keeper of immortal bets
No regrets
Just pawns on the board
They bow to the highest court
Challenged by no gun nor sword
Thanatos thy Lord
Track Name: Doom Of Sargoth
Four witches, the temple of ire
Lost spirits, drawn into the fire
Black masses, driven by fear
Lone shadows, ordained to disappear

And with every bitter draught
Darkness infests every thought

Lone wanderer, a monarch of yore
Dethroned by the ireful blades of war
Forsaken, a powerless shell
From exile, called by witches' spell

Father of the
Doom Of Sargoth
All of your hope is lost
Nightmares of the
Doom Of Sargoth
Captive of the frost
Track Name: Cydonian Sands
I am the watcher, the silent mind
Protector, collector, the one of its kind
Formed in this wasteland to see what's concealed
Decide when the day comes my power revealed
No arms and no legs, just eyes in a face
Unclosed to witness what happens in space
A slave to my masters, a god for your fate
I wait for the day you meet destiny's gate

A time and dimension so old and so far
All beings are trapped in their prison of war
With all hope forgotten an image emerged
Create a new world a culture deterged
Built a machine to protect and control
To keep them from violence preserve a pure soul
A merciless task, with virtuous intent
Once and for all in a world without end

Buried deep under cydonian sands
An ancient device for the final advance
Creator and butcher, condemned to outlast
No conscience or anguish, no future no past

A time and dimension, a gift from afar
All beings comsumed in the fallouts of war
The darkness arising pursuing its prey
An imminent sign of the mortal decay
Distracted by trifles for frontiers and wealth
Evolved to neglect everyone but oneself
Humanity's downfall to all-out defeat
While the key to salvation lies right at their feet

Constructed and hid by cydonian plans
To remain and to serve to whoever demands
Sealed for eternity never exposed
Protected by one, the only who knows

Bandcamp Daily  your guide to the world of Bandcamp

Tasty gems from around the world, plus interviews with Kaitlyn Aurelia Smith and Nick Hakim.